Last week I headed down south to Slovenia to attend the second SharePoint Conference Slovenia in Murska Sobota. As Murska Sobota is just a hour away by car, it wasn’t that far to travel :)

I went there with two goals in my mind. I was looking to get some fresh pics of the new 2010 Version of SharePoint and by far the important point, I aimed to get in touch with other SharePoint guys.

The conference was held at two locations. The first day was a workshop about the 2010 product and on the second day the main conference took place.

Day one started with an impressive talk on Taxonomies and Metadata by Zlatan Džinić. He showed us the new Navigation by Metadata feature of 2010 and how all that is integrated in the new version. As he presented on the July build of the product he occasionally ran into some strange behavior. But hey, that’s the point! He showed the product even in an early stage instead of using a prepared video where everything works as expected. That’s fair and straightforward and that’s how even an exception or an “unkown error” can make you likeable.

The second talk was by Agnes Molnar and covered the whole administration field. As all of you know, SharePoint administration is something we could talk about for ages. As Agnes only got two hours of the program she tried to give an good overview about the features and a short deeper dive into taxonomy and business connectivity services administration. Especially BCS will turn out huge in my humble opinion.

The final presentation of the first day was done by Claudio Brotto. He introduced himself as a pure dev head, and he really is one! Great to see that even the best guys in the business fight with the same problem as we ordinary guys do: tooling in SharePoint development. How can anybody even survive without WSP Builder? He showed some new templates in the new version of Visual Studio and how important SharePoint Designer will get in the next version. He also showed some features of the client side object model and how it can be used. It seems that developing for SharePoint will get a little bit easier as it is with the current version. But as always, wait until the RTM …

After that I was heading for some time in the swimming area of the hotel to get prepared for the SharePint event in Murska Sobota. What a fine event :) Drinking one or two pints and talking about SharePoint, very nice. Stayed there till the end, as I always do when it comes down to drinking beer and talking with the geeks. Renato managed to take a pic of Woody, himself and me with his phone’s cam. Here we go :) 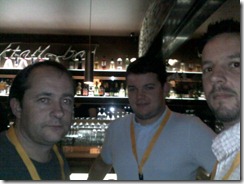 As I was the only Austrian out there, that’s probably the time I started to get called “the Austrian guy”. Thanks to Zlatan, Toni, Woody, Renato and all the others for that great time.

The next day started somehow later as I thought it would. I missed the key note in the morning, but the nice guy from the organizing team lead me straight to the conference area, instead of getting lost round about 80 kilometers away from home.

So I stumbled into Zltan’s talk about BI solutions in SharePoint 2010. Awesome presentation! Visio definitely rocks! Also the new DAX features in Excel will help the new version to take off! Zlatan showed us how you can connect external Data from, let’s say a SQL database with Visio Shapes. So you can integrate BI data into your process documentation within minutes. Seems like a real step forward.

After that Renato and I really enjoyed the session titled “Assembly-Free SharePoint Solutions” by Daniel McPherson. He showed us what you can do without putting a assembly into the bin or GAC by just using JavaScript and the built in web services. Check out his blog, as he shows you a appstore like solution to deploy a webpart or theme remotely to your system just by the use of SharePoint web services. This approach will even get bigger if you think about the new buzz word, the cloud. Or do you really believe Microsoft will put your DLL into their servers? What was really amazing to us was the fact that Daniel showed us what is possible with the ootb features with just a little bit of JavaScript. He really got me with that idea and I’m looking forward to play around with this approach soon. Check out his blog, where he talks about solutions like Tunnelpoint or ProduShare.

The next session was about Test Driven Development by Andrew Woodward. Andrew blew me away with his deep and honest motivation for unit testing in SharePoint. I really enjoyed to be his pair buddy during his TDD session. He reminded us all that although SharePoint dev is somehow horrible in the beginning, we still should aim to use all the industry’s best practices used anywhere else in developing. “You can’t unit test SharePoint” A simple statement. A simple lie. He also warned us about the fact that we SharePoint guys will probably be the first guys being confronted with true 64 bit development in the Microsoft stack. Expect some problems there, as Visual Studio is still 32 bit! I also fully admit to Andrew’s tshirt: “Legalize unit testing”. And thanks to the man for the Typemock license.

The last session I attended was by Toni Frankola. He presented us some ideas to boost our SharePoint deployments. Nice to see what ideas are around in the field. Making some tiny features just with the help of JavaScript and Images. Reduce the hyperlinks on your page as users tend to get lost with an overloaded page. We already follow that path at Solvion, as we also made the experience that putting everything on the start page is a sure way to get people mad about SharePoint. Always keep KISS in your mind: keep it small and simple.

Finally I would like to thank Jose Antonio Morales and Matjaž Korenjak for putting together a real great conference. Everyone of your team was polite and friendly. I didn’t remember a single thing to moan about. I really enjoyed my time there and I’m definitely looking forward to meet with you guys again.

Subscribe to our newsletter and we’ll send you the emails of latest posts.